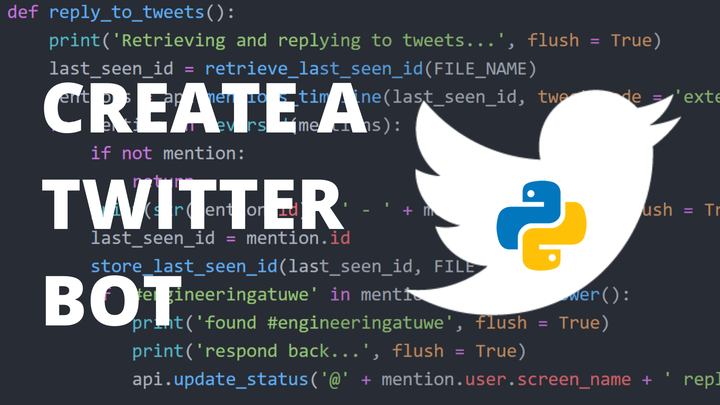 As part of my aim to learn Python, I decided to teach myself by completing a bunch of projects created in Python, and a Twitter bot is my first project!

The purpose of this article is two-fold:

I came across a video by CS Dojo How To Create A Twitter Bot With Python. Do check it out! I also created a video showing the process for those that rather prefer watching how it is done vs. reading about it.

The first thing you need to do is to install tweepy which is the Python library that you will use to connect to the Twitter API. You can install is using the command prompt:

Once that is done, you can get started with setting up your twitter_bot.py script.

If you plan to commit your code to an online repository, do not add your access keys to your code directly, as others will be able to see it.

The last three lines of the code sets up the API so that you can use it for all kinds of cool stuff. Make sure you go have a look at the Tweepy documentation to find out what the tweepy library can do.

First we need to collect all the tweets that mention the account. Tweepy enables you to collect the 20 latest tweets mentioning your account.

It is necessary to specify the last tweet ID that you interacted with to ensure that you don’t retweet or favourite any tweet you already have.

We can store the ID of the last tweet that we enteracted with in a .txt file.

The function opens up the textfile and reads the tweet ID and returns it as an integer in the variable last_seen_id.

We loop through all the tweet IDs in the mentions variable. The loop starts at the end of the list, which will be the oldest tweet that we haven’t interact with yet.

The tweet ID of the last interacted tweet is updated in the text file, using the function:

The tweet ID stored in the mention.id is then favourited and retweeted with the commands:

Now that you have set up the bot it needs to run continuously to check for tweets mentioning your account. This can be done by putting the function in an infinite loop:

The code time.sleep() pauses the while loop for a period specified here as 15 seconds. Make sure to add

to your script to enable this functionality.

The problem with running the bot locally on your computer is that your command prompt window will be occupied running the bot, so you won’t be able to use it.

The best solution is to deploy it on a server, and Heroku is a free service for just that purpose! The best place to start is to follow Heroku’s step-by-step guide for deploying using Python.

You will need to sign up for an account and then install the Heroku CLI to your computer. You can either link your Heroku account to your Github repository where your bot has been uploaded, or you can upload it to a Heroku repository.

We will use the Heroku repository. Once you have installed the Heroku CLI to your computer, login using the command prompt:

The next step is to initiate a git repository on your local machine using:

You can also clone the getting-started-with-python repository that Heroku provides. It has all the additional documents already created that you need. All you need to do is copy those files over to your project’s folder.

After a git repository has been initialised, you need to commit all your changes and then create an app on Heroku, which prepares Heroku to receive your source code:

So the last problem is that you need to get your API authorisation keys to the Heroku repository without making it public knowledge.

Before you push your repository to Heroku, make the following changes to your code:

The above code makes sure that you do not need to commit your Twitter API keys. After you have edited your code, you need to add your API keys to your Heroku account by going to your Heroku app, going to settings and editing the Config Vars.

Also, there are a few more files that you need to upload to Heroku before it will be functional. This include:

This is only necessary if you haven’t already copied them over from the repository getting-started-with-python that you cloned.

Heroku apps include a Procfile that specifies the commands that are executed by the app on startup. You need to use a Procfile to declare that this is a worker:

The requirements file lists the versions of all the programs that your bot will use:

This file specifies the version of Python that Heroku needs to use. At the time of writing this, Tweepy does not support Python 3.7, so you need to specify an older version. 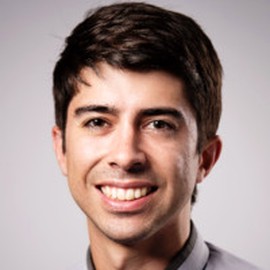 Lecturer in Design and Dynamics

A Mechanical Engineer passionate about creating robust and innovative products and teaching others to do the same.